In With The Old

This week at QP Jewellers we’ve been trawling through an array of fresh creations in an attempt to single out our favourite new jewellery designer. After much deliberation and several vats of coffee we can finally say we’ve tracked her down and it’s safe to say she’s worth the arduous search.
Born in New Zealand, Jessica McCormack is one of the most exciting designers working in Britain today. Her father was an antiques dealer and auction house owner who possessed a keen talent for finding beauty where few others looked. McCormack’s career began with a lucrative internship at the Victorian jewellery department of Sotheby’s. This was her only formal experience when she then launched her own brand of finely handcrafted diamond designs. In 2007 she worked, with punk tenacity, out of a bizarre studio in Clerkenwell decorated with a collection of animal skulls and a swing hanging from the ceiling. She ascended into the spotlight, in 2011, when Rihanna bought one of her unique pieces, a stylish earcuff adorned with 37 shining diamonds, named the Wing of Desire. This particular piece was chosen by the Barbadian pop star from McCormack’s Messenger of the Gods collection. It featured a centred five-carat cushion diamond flanked by stylised wings and also utilised the designer’s favoured Georgian cut-down setting to accentuate the centrepiece. 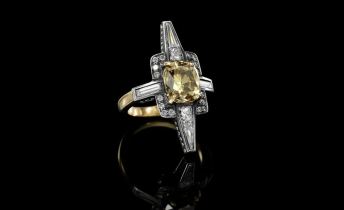 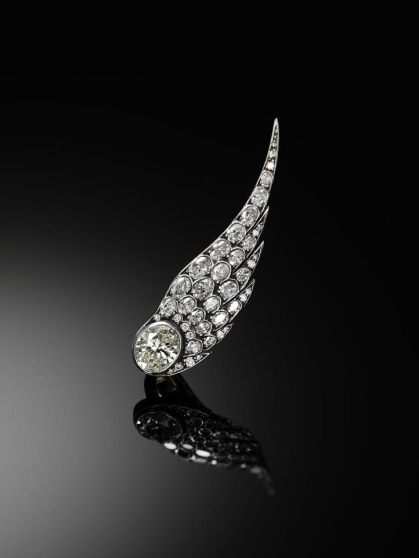 When McCormack talks about jewellery she does so with a grounded sense of having been empowered by it. In the past she talked specifically about the heart-shaped Kia Ora pendant that her father had given to her. The Jade-like greenstone featured in the design is called, Pounamu, which is only found on the South Island of New Zealand where McCormack was raised. She describes the piece as being like a pearl, the lustre of which is improved over time as a result of being worn next to the skin. Her comment conveyed the fact that such a vivid reminder of home and family would always remain beautiful. This on-going theme of marrying the past and present pervaded her more recent pieces. She seems to prefer that jewellery which appealed to the heart, offering an emotional significance that couldn’t be measured in shine and cut. For this reason McCormack speaks highly of heirloom pieces. In her own collection she displays a set of ruby and diamond double-clip brooches that once belonged to her great-grandmother and which had, she proudly stated in an interview with The Telegraph, ‘been worn by three generations of women’. Essentially the key to her appreciation in this instance is the romantic continuity that imbues the pieces with power. She then went on to explain her view that people are a bundle of stories passed down through generations and implied that jewellery could help in the telling of those stories.
In keeping with this perspective, McCormack often incorporates subtle narratives into her designs so that the wearers could enjoy a more intimate interaction with their jewellery. For example, the design of her Wing of Desire piece was inspired by Greek mythology, taking the motif of Hermes’s winged sandals, which He used to deliver mortal dreams to the Gods in their cloud kingdom. Some of McCormack’s most iconic designs belong to bespoke pieces delivered to the likes of Madonna and Carine Roitfeld. She spun all kinds of innovative wonders from her ornate, art-filled salon on Mayfair’s Carlos Place. Mostly her creations reflected her background in antique jewellery and the craft to which her father had devoted her work. She called these handpicked designs ‘miniature pieces of art’, infused with such unusual influences as city skylines and the bold art of Maori tattoos. McCormack’s portfolio is resplendent with a diverse array of designs, many of which are showcased in her refined private collection.
In 2008 McCormack launched her captivating collection: XIV Sins and Virtues. The fourteen pieces she created for this collection were ingeniously based on each of the seven deadly sins and seven lively virtues. Each individual invention was intimately characterised to befit their designation, like, for example, the sloth earrings that featured dangling diamond-studded spheres and skulls framed with detachable partridge feathers. McCormack described how the spheres were supposed to symbolise bubbles being blown by some spoffish layabout and thereby the wasting of time.
At QP we were inspired by McCormack’s intriguing symbology and so we decided to arrange our very own decadent collection – we just couldn’t resist it. We must say we’ve thoroughly enjoyed choosing a piece to match each deadly sin: sloth, pride, envy, wrath, gluttony, lust and greed.
semi formal dresses