Skip to main content
Labels
Posted by thegudeer.com May 26, 2019

THE ROLEX SUBMARINER SELLS FOR £50,430 incl. premium AT CHISWICK AUCTIONS

THE ROLEX SUBMARINER SELLS FOR £50,430 incl. premium AT CHISWICK AUCTIONS
Excitement levels were running high at Chiswick Auctions’ Watch auction on the 12th of September when a stainless steel Rolex submariner sold for an impressive £41,000 on the hammer. (£50,430 incl. premium)
Breaking the house record for a price achieved for a watch lot; it followed the sale of a Burmese ruby and diamond ring for £147,600 incl. premium in the Jewellery auction held earlier that same day.
The honest condition and true originality of the watch made it a lot worth fighting for. In particular, the condition of the dial was exceptional.
Head of Watches, Matthew Caddick, commented that the successful bidder – who flew in from abroad to attend the sale in person – was confident upon handling the watch in person that it was the best available in the market.
In 1953, French Navy diver Jacques Cousteau wrote The Silent World, narrating his underwater exploration. The book, and the Academy
Award-winning film that followed, captured the world’s imagination and forged a generation of recreational divers.
Rolex’s response was to create a classic and versatile wristwatch that continues to stand the test of time – the Submariner. 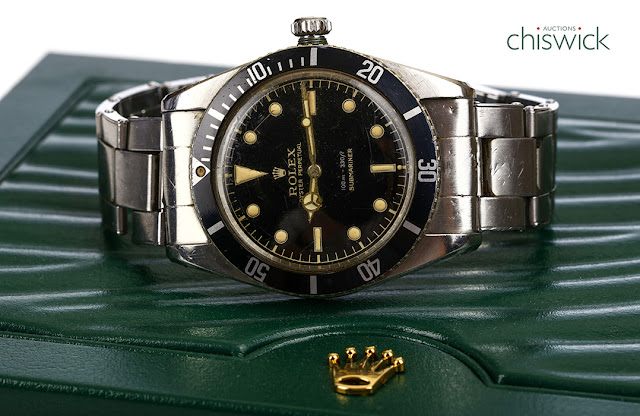