Skip to main content
Labels
Posted by jewelrycm May 14, 2015 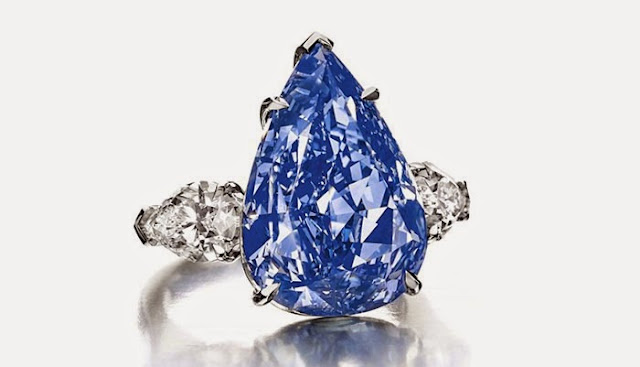 The world's largest and most flawless blue diamond is set to go under the hammer at Christie's "Magnificent Jewel Sale" auction in Geneva on the 14th of May 2014. The stunning 13.22 carat diamond is expected to fetch between $21 to $25 million.
Making up less than two percent of the world's diamond production, blue diamonds are extremely rare; especially one of this quality and magnitude. While Christie's would not reveal the owner of the jewel, it is said to have been mined in South Africa. Rahul Kadakia, Head of Jewelry for Christie's Americas & Switzerland said of the diamond: "To have a stone that weighs 13 carats is near impossible. The stone is internally and externally bereft of any imperfections...in simple terms, it's the best blue diamond in the world."
Diamonds have been making record breaking sales over the last year. In November, Sotheby's sold a plum-sized diamond, known as the Pink Star for $83 million, while a month earlier the prestigious auction house sold a flawless white diamond for $32 million. In fact, Christie's reported that the owner approached them after seeing several colored diamonds fetching well above their estimate value in recent sales.
Labels: DIAMOND