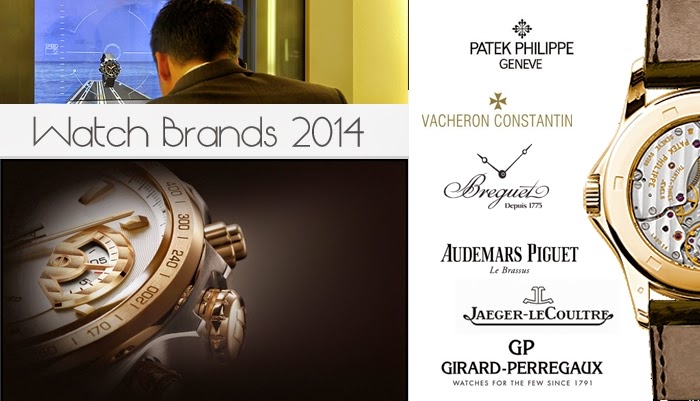 More than just a sophisticated time telling tool, a watch tells a multitude of stories - from its creator to its wearer to the times we live in.

For many watch enthusiasts, there is often a strong sentiment attached to one particular watch brand, which is usually passed on from a beloved member within the family. There are those who hail from generations of Patek Philippe devotees, those who belong to a dynasty of Vacheron Constantinadmirers and then there are those who are descendants of Jaeger LeCoultre aficionados. Then of course, there is a matter of taste, style, personality, values and the wish to be perceived or appear in a certain way.
Therefore, one can safely conclude that watch preference is largely subjective. However, saying that, there is still a need to sort out the big players from the little leaguers and there is still a need to understand which brands merit the definition of “superior” or “top class.” So, Luxe High Life has put together a reference guide of the crème de la crème in terms of craftsmanship, price, reliability, investment value and public recognition. We would love to hear your feedback regarding the list and also we would also love to know your personal favorites and why.

Founded in 1915, the Swiss company has become the most commercially powerful watch brand in the world. While watch connoisseurs like to snob it, there is no denying that this company demands respect in terms of its iconic culture, marketing prowess and turnover. While the brand is not known for having particularly complex movements, Rolex watchmakers, however, focus on crafting a comfortable design that is easy to fix as well as being very reliable. Indeed, Rolex watches are so reliable that each timepiece is COSC certified by the Swiss Official Chronometer Testing Institute. Also, Rolex timepieces are renowned for their excellent investment value and well preserved vintage models can easily achieve 6 figures at auction.
For latest collection browse www.rolex.com

Founded in 1846 by Ulysse Nardin, an accomplished Swiss watchmaker, the brand, over the past 165 years, has become widely respected for its highly accurate marine chronometers. Businessman Rolf Schnyder, acquired the brand in 1983 and went on to relaunch it with a design and technical makeover. Under Schnyder’s management, the company started to produce pioneering timepieces by utilising innovative materials and manufacturing techniques. To date, the company has attained 18 international gold medals and 4,300 first prizes in chronometrics.
For latest collection browse www.ulysse-nardin.com

Founded in 1735 by Jehan-Jacques Blancpain in Villet Switzerland, today, Blancpain is owned by the Swatch Group and has its headquarters situated in Biel Switzerland. Placing emphasis on quality rather than quantity, Blancpain produces fewer than 30 watches per day with each timepiece being crafted by a single watchmaker. Although it encountered financial difficulties throughout the ages, the company has retained its “supreme quality” brand identity by committing itself to the production of “grande complication” wristwatches and today, according to its commercial slogans, the company has never produced quartz watches in the past nor does it intend to in the future.
For latest collection browse www.blancpain.com

With origins dating back to 1791 and as an inventor of many innovative concepts, Giarard Perregaux is considered one of the top ten watch manufacturing companies in the world. Designing and producing its own movements, they are known for their timeless and more classic designs. Unlike other high-end watch brands such as Rolex, Girard-Perregaux only produces 12,000 pieces a year. Girard-Perregaux’s most well known models include Vintage 1945 (featuring a rectangular case and art deco design), ww.tc (world-wide time control featuring 24 time zones on the dial) Girard Perregaux 1966, Laureato Evo³ and the Cat’s Eye.
For latest collection browse www.girard-perregaux.com

A major player in watchmaking history since 1833, Jaeger-LeCoultre is the first manufacturer to have been established in the Vallée de Joux, Switzerland. Today, Jaeger LeCoultre is undoubtedly one of the most prolific in-house movement manufacturers. Over the years, the brand has been crafting some of the finest watches ever made such as the Reverso, the Duoplan, the Master Control, the Memovox Polaris, the Gyrotourbillon and the Atmos.
For latest collection browse www.jaeger-lecoultre.com

Founded in 1875 in Le Brassus, a village in the Joux valley region in the heart of the Swiss Jura, Audemars Piguet has become renowned for its legendary spirit of innovation. The firm is the oldest Manufacture of Haute Horlogerie never to have left the hands of the founding families. From the first Grande Complication pocket watch presented in 1882, to more recent models such as the Jules Audemars and the Royal Oak, the company continues to produce some of the world’s finest timepieces.
For latest collection browse www.audemarspiguet.com

The German high-end watch brand has been crafting meticulously precise timepieces since 1845. Based in Glashutte Germany, all Lange movements are developed, producedand assembled by the brand itself. Known for its Glashütte design which includes three-quarter plates, hand-graved balance cocks and screwed gold chatons, all its movements are made from “German silver,” a metal composed of copper and nickel. Each A. Lange & Söhne timepiece is highly refined, highly complex and perfectly assembled.
For latest collection browse www.alange-soehne.com

With an incredible past history that includes Marie Antoinette and Napoleon, Breguet has an historical legacy that would make any high-end watch company proud. Founded in Paris in 1775 by Abraham-Louis Breguet, a watchmaker and student of mathematics; the company, since 1976, has been run by The Swatch Group. Today, each timepiece is crafted in the Vallèe de Joux in Switzerland. The brand has pioneered numerous watch making technologies such as the tourbillon (invented by Abraham-Louis Breguet) the gong spring for the minute repeater, the pare-chute (timepiece shock absorbers) and the single hand watch know as the “subscription watch.”
For latest collection browse www.breguet.com

Founded in 1755 by Jean-Marc Vacheron, a young entrepreneur as well as a skilled watchmaker based in Geneva, Vacheron Constantin is the oldest watch manufacturer in the world. It once held the number one spot on the Swiss A list but the brand’s marketing prowess and return on investment value falls a bit short of Patek Philippe. However, it has still maintained the image of excellence, maturity and old money. The company’s philosophy, “do better if possible and that is always possible,” has led it to create timepieces that countlessly push the boundaries of perfection. Aligned with Geneva’s standards of excellence, each Vacheron Constantin watch comes with a guarantee of provenance, precision and durableness.
For latest collection browse  www.vacheron-constantin.com

The family run firm is as renowned for its precision and craftsmanship as it is for its rare and exclusive timepieces. Co-founded in 1851 by Antoni Patek, a Polish watchmaker and Adrien Philippe, a French watchmaker, the duo went on to pioneer the perpetual calendar, split-seconds hand, chronograph and minute repeater. Today, the company develops and manufactures its movements in-house to its own quality criteria. Old world artisans who have perfectly mastered micromechanical engineering craft each watch by hand. Since 1839, 100% of its movements are awarded the official Hallmark of the Geneva Seal. Also, investing in a Patek Philippe (in particular rare vintage models) is always a smart move as their high market value means that timepieces can easily run into the six figure bracket at auction.