When jewels from a notable private collection come up for auction, a frenetic buzz of excitement ensues.  As long as auction houses have existed, so too have auctions featuring property from the estates of prominent figures.
The world’s largest auction houses, Christie’s and Sotheby’s, date back to the 18th century.  Initially, Christie’s rose to fame selling fine artworks, while rival Sotheby’s traces its roots to the rare book business.  Over time, both houses expanded into other luxury auction markets, eventually coming to also specialize in  jewels and rare gemstones.
Historically, jewelry was simply one element of much larger estate auctions.  Christie’s first sale of fine jewelry came in the aftermath of the French Revolution when, in 1795, it auctioned the magnificent jewels of Madame du Barry, King Louis XV’s mistress.  The sale realized £8,791 ($1.3 million today), which was the record for the most expensive jewelry collection sold at auction for nearly two centuries.
From Sotheby’s historic sale of the Duchess of Windsor’s jewelry in 1987 to Christie’s recent auction of Elizabeth Taylor’s jewels, there have been a number of private jewelry collections auctioned for in excess of $10 million.  The collections include many of the most famous jewelry pieces ever created.  Without further ado, I’ll present the ten most expensive jewelry collections ever sold at auction.
1.  The Collection of Elizabeth Taylor:  The Legendary Jewels – $137,235,575
Christie’s New York, December 13th & 14th, 2011
Known for her prodigious love affair with jewelry, Elizabeth Taylor amassed an astounding collection of jewels over her lifetime.  This legendary collection, along with other personal possessions, was sold at Christie’s New York in December 2011.  The two-day sale of 270 lots realized a staggering $156.8 million, with the jewelry portion accounting for $137.2 million of the total.
Shattering records left and right, the sale garnered worldwide attention with its sensational jewels by major jewelry houses, including Bulgari, David Webb, Cartier and Van Cleef & Arpels, as well as specially commissioned pieces by JAR.
The sale was headlined by La Peregrina, a 16th century pearl necklace, which sold for $11,842,500. The necklace set two world auction records: for an historic pearl piece (obliterating the $2.5 million record set by La Regente at Christie’s Geneva sale in 2005) and for a pearl jewel more generally (surpassing the $7 million record paid for The Baroda Pearls at Christie’s New York sale in 2007). 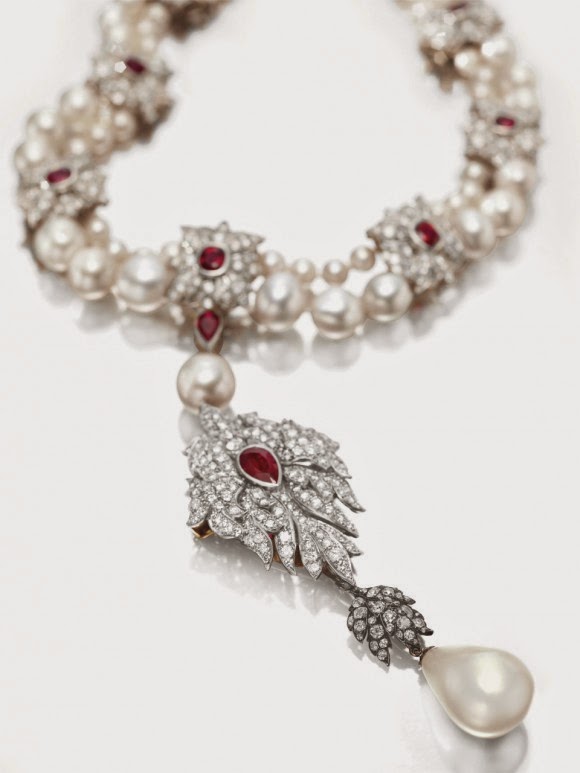 La Peregrina – A Natural Pearl, Diamond, Ruby and Cultured Pearl Necklace, by Cartier
Photo courtesy of Christie’s
Other notable highlights from the landmark sale include:
The Elizabeth Taylor Diamond, a 33.19 D-color, potentially Internally Flawless diamond that sold for $8,818,500 and set a record price per carat at $265,697. 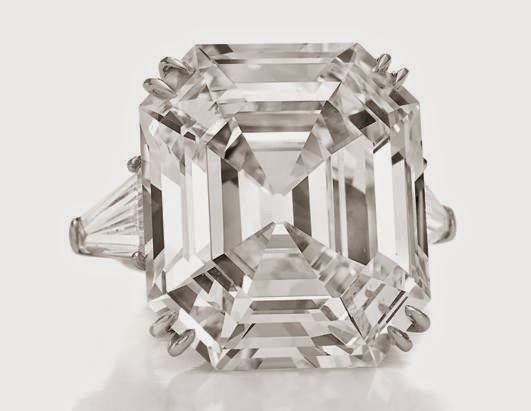 The Elizabeth Taylor Diamond Ring
A gift from Richard Burton in 1968, The Elizabeth Taylor Diamond was a constant in Ms. Taylor’s life and became the ring that she wore virtually every day for more than three decades. Bought at auction as the Krupp diamond, for $300,000, it was renamed in homage to this spectacular gem’s most glamorous owner.
Photo courtesy of Christie’s
The Taj Mahal Diamond, an Indian diamond and jade pendant necklace (attached to a matching ruby and gold chain designed for the piece by Cartier), was a gift from Richard Burton on Elizabeth Taylor’s 40th birthday. This historic jewel soared above its pre-sale estimate of $300,000-500,000 to an astounding hammer price of $8,818,500, representing a record price for any Indian jewel ever sold at auction. 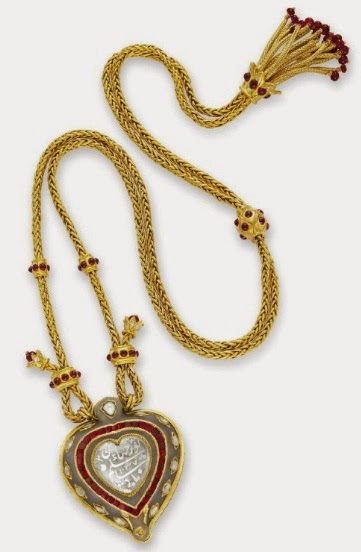 The Taj Mahal Diamond
Set with an inscribed heart-shaped table-cut diamond, within a red stone and jade mount set with table-cut diamonds, the reverse decorated with an enamel latticework motif, from a gold neckchain set with cabochon rubies and old mine-cut diamonds, mounted in gold, inscribed heart-shaped table-cut diamond bearing the Islamic date 1037 [1627-1628], gold and enamel cage of later addition, neckchain circa 1972, length adjustable, pendant suspends 17½ ins. at longest
Neckchain by Cartier, no. 53559
Photo courtesy of Christie’s
The Bvlgari Emerald Suite, composed of wonderful matching emerald and diamond jewelry (lots 26-31) fetched a total of $24,799,000.  Taylor acquired the suite between 1962 and 1967, selecting the majority of the jewels over many repeat trips to the Bvlgari boutique on the Via Condotti in Rome. 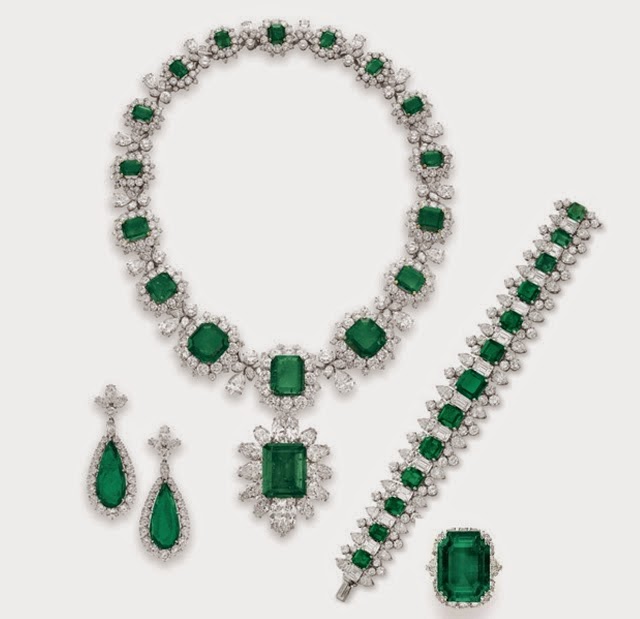 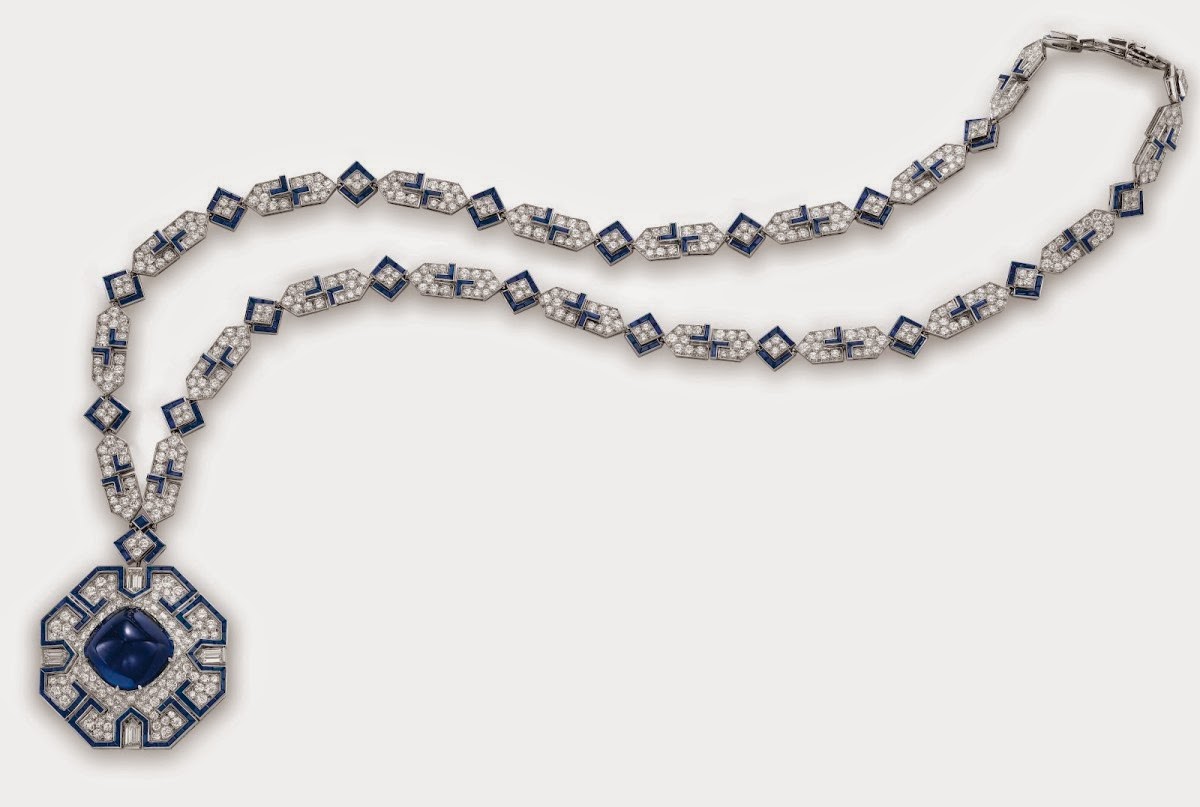 The Bulgari Sapphire Sautoir, now part of Bulgari’s permanent collection
Photo courtesy of Christie’s
The Richard Burton Ruby and Diamond Ring, of 8.24 carats, by Van Cleef & Arpels, was a Christmas gift from Richard Burton in 1968. Burton had promised to buy his wife a special ruby, with perfect red color (“But it has to be perfect”, he warned at the time). Four years after making the promise, he tucked a small box into the bottom of Elizabeth’s Christmas stocking – so small that she missed it when opening her gifts. This ring sold for $4,226,500, setting a record for a ruby per carat at $512,925. 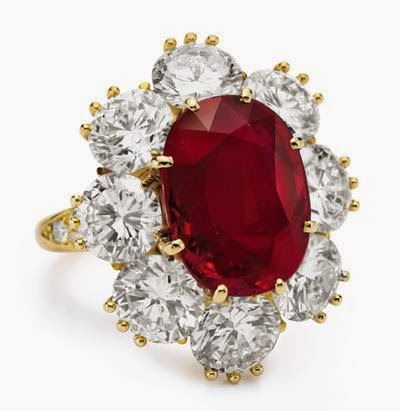 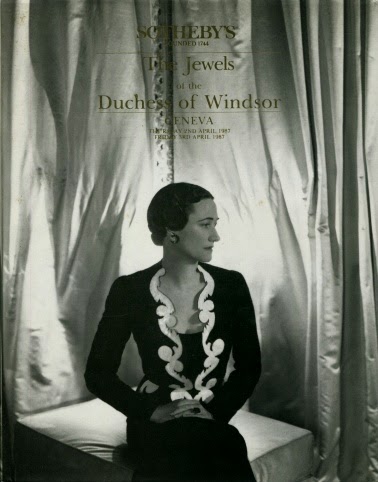 In April 1987, the two-day sale of the jewels of the Duchess of Windsor at Sotheby’s would forever change the jewelry auction business.  An international celebrity and fashion icon, the Duchess, or Wallis Simpson as she was once known, had famously – and somewhat scandalously – lured King Edward of England away from his throne in favor of marrying her.  Throughout their 35-year marriage, the Duke showered his wife with custom made jewels from the world’s major jewelry houses. 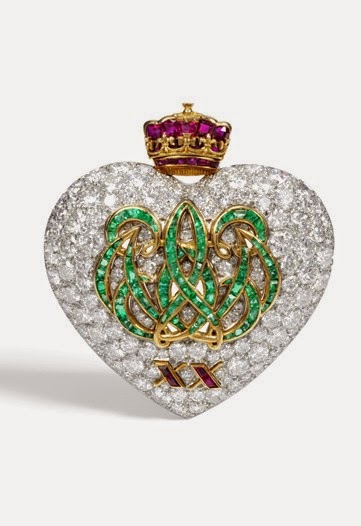 The pin was made to commemorate the couple’s 20th Wedding Anniversary in 1957, designed by Cartier, Paris.
Of heart-shaped design, applied to the centre with a monogram of the initials W and E set with calibré-cut emeralds, above the Roman numeral XX set with calibré-cut rubies, surmounted by a Royal Duke’s coronet similarly set, to a background pavé-set with brilliant- and single-cut diamonds, measuring approximately 34mm x 38mm x 10mm, Cartier maker’s mark and numbered, French assay marks.
Photo courtesy of Sotheby’s
The remarkable collection of just over 300 pieces included iconic creations by Cartier, Suzanne Belperron and Van Cleef & Arpels, many of which are one of a kind jewels that defined the Duchess’s unique and fashion-forward sense of style.  With bidders from 24 countries, notable buyers of the her jewels included Elizabeth Taylor, the Cartier Museum, Calvin Klein and jeweler Laurence Graff. 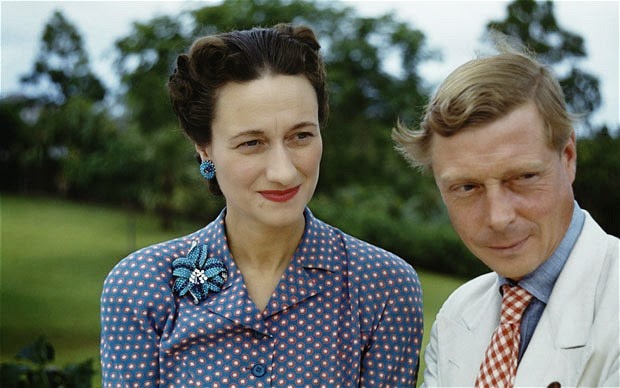